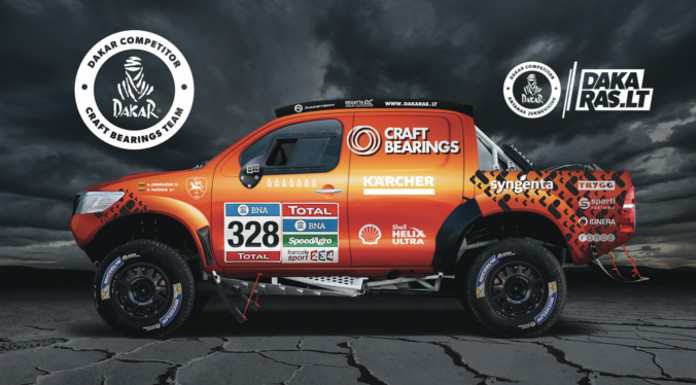 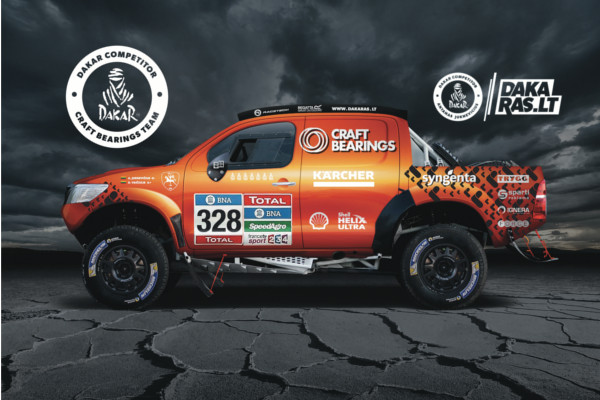 The Lithuanian team of Antanas Juknevičius and Darius Vaičiulis, which is going to compete in the 2017 Dakar during January 2017, made an agreement with its main partner and will have a new name – CRAFT Bearings

CRAFT Bearings, an international company established by Lithuanians, is a manufacturer of automotive and industrial bearings with operations in 80 countries around the world, including Central and South America. According to its director, Vygantas Rimgaila, the decision to cooperate together was driven by two main reasons – their similar approach to quality and experience.

“Customers around the world choose us because of our well-developed worthwhile products and reliability. For this reason, we place a great amount of emphasis on experience and professionalism when we choose our partners. Antanas is the most knowledgeable Lithuanian in Dakar. His many years of experience and high achievements are the best reflection of these traits”, said V. Rimgaila. “Dakar is a unique challenge and it is not for everyone. Every detail matters, and can often affect the final result in such a lengthy and tough competition. Our actions are based on the same approach, therefore, we are proud to be part of the professional team of Antanas. 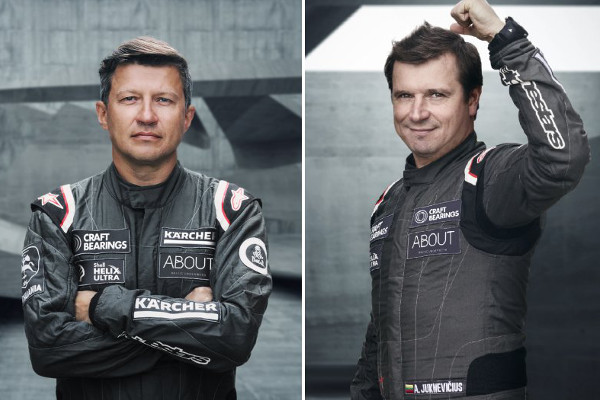 “First of all, I am very happy that the team is being supplemented by such a strong, internationally known Lithuanian company,” said Antanas Juknevičius in commenting about the new main partner. “While business in our country is often cautious about funding sports, even more than state institutions, there are bold companies that see the benefits of partnership.”

The racer says that the choice of partners is primarily based on the values communicated by the company. “I can clearly see that the companies in the list of partners of our company have one thing in common. Whether it is a global brand or a Lithuanian company – all of them are known for professionalism and the high level of services or products in their area, and CRAFT Bearings is a perfect example. The Dakar challenge is not that overwhelming with this team of professionals.”

Before the start of the Dakar rally, the Antanas Juknevičius team of CRAFT Bearings will still have a trip to France, to the city of Le Havre. It is from this port that cars, trucks, motorcycles and quads that will start in the competition, and will be shipped to Argentina after a technical commission.

We are unpredictable in a good sense
On Friday, Antanas Juknevičius and his new co-driver, Darius Vaičiulis, invited friends and journalists to a press conference in the Energy and Technology Museum of the capital city. Here, the fans of Dakar saw the upgraded Toyota Hilux Overdrive car that will be used in the 2017 Dakar for the first time. 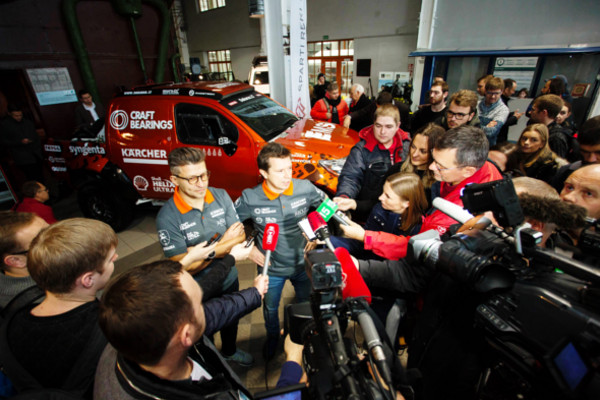 The car has already seen a number of races. However, it is continually maintained and its components are renewed. Therefore, it is in great shape and ready for the desert marathon. This, according to Antanas Juknevičius, is the reason for his greatest joy.

Speaking of expectations of the place to be taken in the 2017 Dakar, Antanas, who will be driving the desert car for the sixth time, was cautious (it is his 8th start in Dakar). The CRAFT Bearings team will try to achieve the best possible result. However, Antanas admitted that in terms of success, it can be unpredictable. In a good sense.

Lessons learned in the 2016 Dakar
According to the racer, Antanas Juknevičius, the focus in the preparation cycle for 2017 was on the most vulnerable points of the car in this year’s competition.

“Last year, we learned the strengths and weaknesses of this car. This machine only had its debut during the last Dakar marathon, so we collected expertise and information. We had most of our problems with the power steering system, so the main task was to find a solution about how we could improve this system. I am very happy that our team of professionals have found the solution and will only have to test it in the conditions of the next Dakar.”

A. Juknevičius, having taken part in the Dakar race for 7 times, is pleased to have the most experienced and resourceful Lithuanian engineers and mechanics on his team, so he is not looking for alternatives. “I think our team has some of the best Lithuanian specialists. All the unique solutions with the power steering and other systems show the highest level of professionalism. It is a pure pleasure to race when you have such technical backing”, said A. Juknevičius in praising the achievements of his technicians.

Dakar monster dismantled to its very frame
A 330-horsepower Dakar monster before the 2016 Dakar start, the car had been carefully examined by Lithuanian engineers, but there was no time for significant modifications back then. According to the chief engineer of the RaceTech workshop, Marijus Bernotas, in preparing the A. Juknevičius car for 2017, the preparation cycle had perfect timing to rebuild the car to an almost immaculate condition. 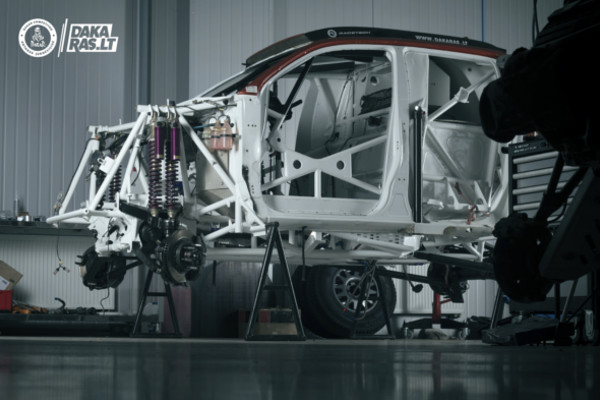 “This year we had more time, so we reassembled and updated everything, essentially. The car was dismantled down to its bare frame structure. Then it was sandblasted, damaged areas were welded, and everything was reinforced and painted. During the races, the car chassis and body are exposed to huge loads and it is natural that the paint and protective layers are damaged by stones, branches or other objects on the track”, said the engineer.

After the 2016 Dakar, the team’s mechanics used factory parts to upgrade the Sadev gearbox and other assemblies. The engine work was minimal: during the trip from South America, the valve seats corroded because of the humid environment, and 4 cylinders became leaky. 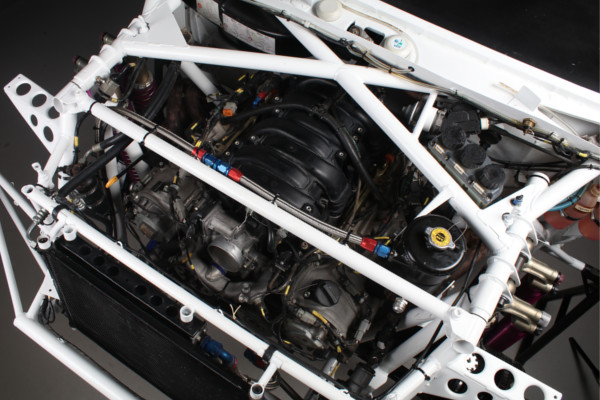 The engine block was disassembled and the heads were replaced. The Overdrive engine capacity can handle 20,000 to 25,000 kilometres of speed stretches. So far it has travelled about 15,000 kilometres. Thus, according to A. Juknevičius, the engine should be able to withstand the 2017 marathon.

“Including Darius in the team was no surprise to me or the other CRAFT Bearings team members. For many years, we have been joking that we would go together to conquer the Dakar, and this year it has become a reality. Dakar is a huge and daunting project, and ambition and financial resources are not enough alone to overcome it. Inner motivation, along with emotional and physical preparation play a very important role. Darius radiates these traits. In addition, his way of thinking and approach to life are very close to mine. We are both responsible and disciplined, but also what might be called “punks” in our approach to life, said A. Juknevičius in talking about his choice of co-driver. 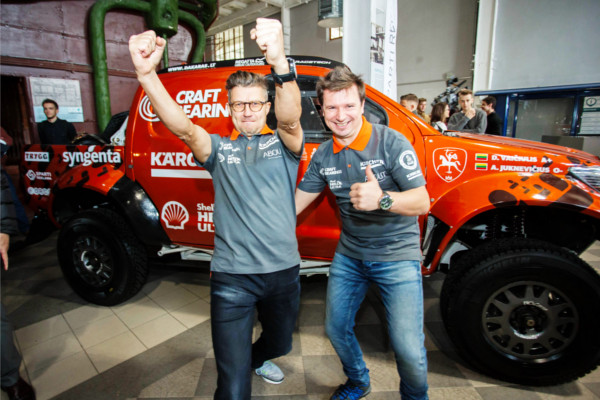 Although a Dakar novice, Darius Vaičiulis already has a lot of sand racing experience. He has participated in the rally raid competition, and together with Antanas Juknevičius, he won the Libya Desert Challenge in the Sahara desert in 2008. The new co-driver is not scared of challenges, he is as “punk” as Antanas. Darius has climbed to the peaks of Mount Everest (Asia, 8848 m), Aconcagua (South America, 6960 m), Kilimanjaro (Africa, 5895 m), Mount McKinley (North America, 6194 m) and Elbrus (Europe, 5642 m).

Two years ago, Darius Vaičiulis drove more than 5,000 km on a motorcycle along the routes of the future Dakar rally. The rally marathon that will start in January 2017 will be held in Paraguay, Bolivia and Argentina.

In the 2016 Dakar, the crew of Antanas Juknevičius and Mindaugas Slapšys ranked 27th
in the absolute automobile class standings. A. Juknevičius has already participated in
Dakar races 7 times, and achieved his highest ranking, 25th place, in 2009. The 2017 Dakar Rally will start on January 2nd. You can follow CRAFT bearings team results
on www.craft-bearings.com 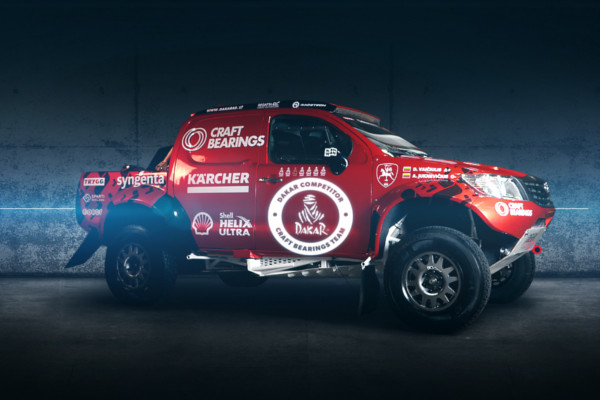