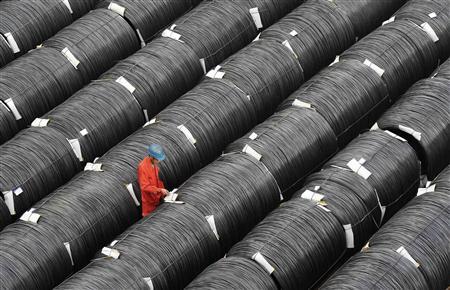 The European Union said it would impose anti-dumping duties on organic-coated steel from China on Wednesday after it found Chinese firms were exporting the product at below-market prices.

An investigation into a complaint by EU steel producers’ group Eurofer found evidence of Chinese dumping in the multi-billion euro market.

As a result the bloc set duties from 13.2 to 57.8 percent of the prices of the imported products, it said in an announcement in the European Union’s Official Journal.
Eurofer’s complaint to the European Commission last November said state subsidies to Chinese steel producers gave them an unfair advantage and damaged EU industry sales. Such complaints are an increasingly regular feature of trade relations between the European Union and China, whose leaders will hold a summit in Brussels on Thursday.

The trade group represents more than 70 percent of organic-coated steel production in the European Union, by companies including ArcelorMittal and ThyssenKrupp . Organic-coated steel sheet, made up of a metal and organic portion stuck together for added strength and durability, is used in construction and home appliances.

The European Commission, which represents EU member states in trade policy, found EU consumption of such steel decreased by 9 percent during the period under investigation while the volume of imports from China rose 49 percent. China’s market share also rose to 13.6 percent in 2011 from 8.3 percent in 2008.

Chinese producers including Union Steel China and Zhangjiagang Panhua Steel had argued that prices they paid for raw steel did not give them an advantage, but the European Commission investigators found these input costs were significantly below international market rates.

The Commission also rejected an argument by Chinese authorities it was violating a judgment by the highest EU court that firms cannot be penalised as operating under non-market economy conditions simply because the state is a shareholder.

Under EU trade law, assessing the normal value for a product – and thus determining if duties should be imposed – depends on whether a company operates in a market or non-market economy.

But the Commission said that court ruling covered state influence in corporate decision-making, while the main reason to deny market economy status to Chinese organic steel producers was that their raw material prices did not reflect market values.